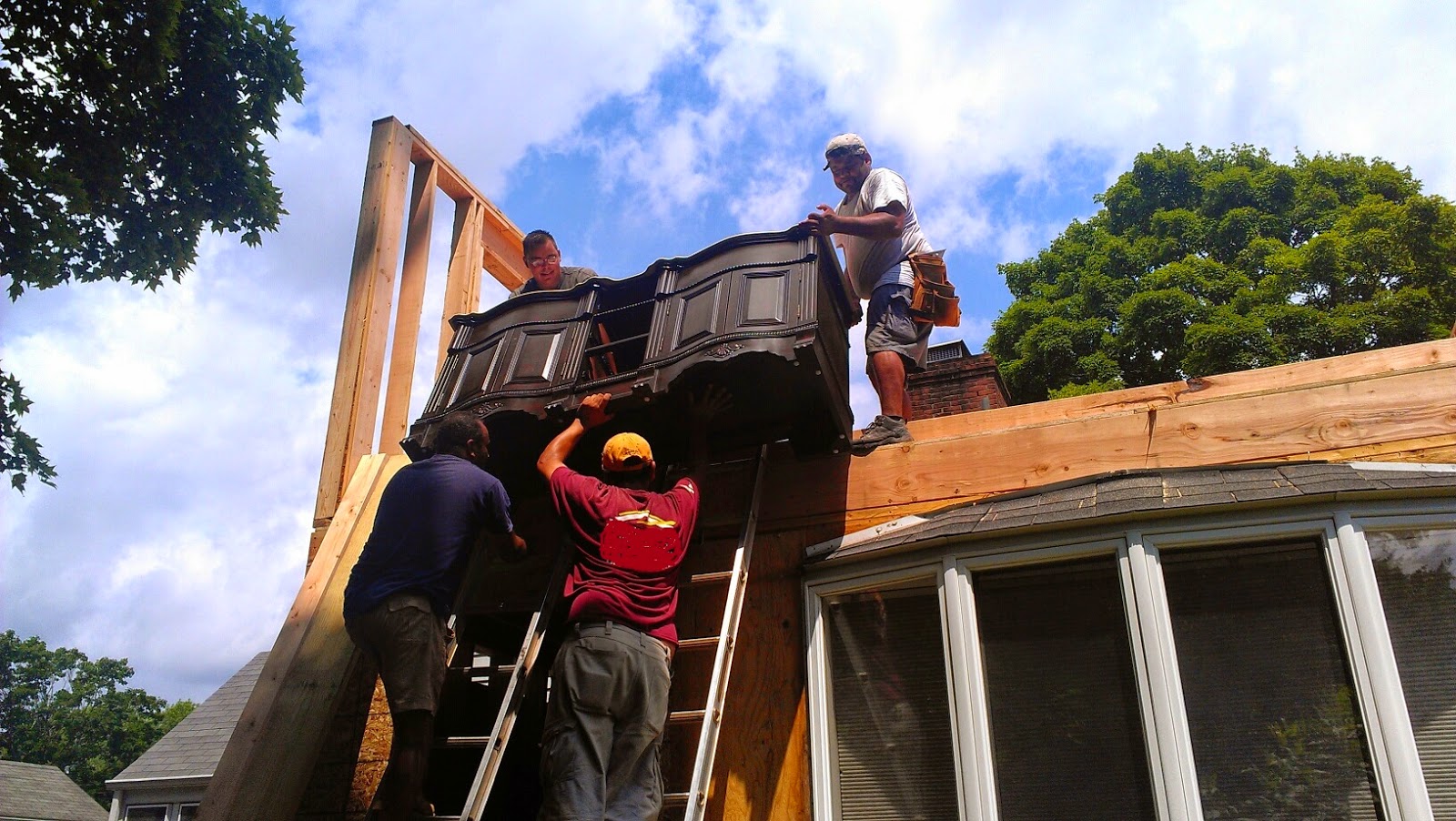 The Hard Way
Several summers ago, when we had a second story built on top of a portion of our house, our contractor didn’t really consider one important detail.
The vanity we’d already purchased would not fit through the doorways they’d constructed.
Which led to what happened in the picture above.
They found a way. The hard way. (Man, it was fun to watch though.)
How does this translate to novel writing? It begins with a confession. I’m not much of a plotter. I love the idea of characters being able to surprise me at any given moment while I’m writing a first draft. It thrills me knowing twists may come up out of nowhere. Think glorious blooms, not groundhogs.
However, through the years (and eleven novels later) I’ve learned it’s mighty helpful to have a few key concepts plotted. And after I spend time stewing, marinating, and plotting, I end up being rewarded twofold. During the revision process I don’t have to figure out how to hoist a 500 pound load on my back. In other words, I don’t have to work backwards and potentially rewrite three quarters of the book because it followed a rabbit trail. Or Uncle Jimmy filled most of the pages and it really wasn’t his story to tell. Second reward is that while crafting the first draft I still insist upon keeping the door open for twists to storm through. Guaranteed, there are always a few that insist upon dropping their luggage and moving in. I welcome them with open arms.
Now, I’m not claiming that once you plan your novel things always go according to plan. It’s by no means “easy” constructing a ninety thousand word manuscript. But, you save yourself from some of the pains you’d likely endure had you decided to forgo the brainstorming and plotting sessions.
So, what measures do I take before writing the first word? I make sure I have a firm handle on the basics.
The Basics
·         Introductions
I get to know the players. I do a psychological head dive to discern more about each and every character. I’ll go into more details about this in a future post.
·         Establish at least 3 Major Turning Points
Moments, events, hardships, decisions that challenge the main character, making life substantially harder for them.
·         POV (Point of View)
Who is best to tell this story? Whose story is this to tell?
·         Past or present tense?
·         Setting
·         Hook
What makes this story different than anything else I’ve read or come across? I craft a back cover blurb for every book I’m working on. I test it out on avid readers—see if it grabs their interest.
*I brainstorm twists, but I’m not rigid with this as they often grow roots and become more meaningful and developed as I work on the story.
Say no to the backbreaking way of novel writing. Don’t worry, novelist, I’ve got your back!
By Wendy Paine Miller - March 25, 2015