We all have a little bit of hero in us and I happen to believe we also have villainous aspects to us as well. In our last day ~ At the Movies ~ we will explore the topic of heroes and villains.
Your assignment, should you choose to accept it is to select at least one hero you are like and if you select a hero, you are then obligated to also choose one villain (trickier, huh?) No major worries--read my answers below to see how I squirmed out of identifying with a horribly dark character (it’s all in the why.)
When I look in the mirror I see:
The Villains:
~ Cameron Diaz as Kimberly Wallace in My Best Friend’s Wedding. Ever the optimist and primed to confess her devout love, Kimberly is seen as “the enemy” to main character, Julianne Potter played by Julia Roberts. Now how mild of an enemy can you get? 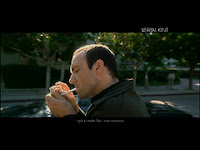 ~ “Verbal” Kint played by Kevin Spacey in The Usual Suspects. I see him in the mirror because like “Verbal” did, I constantly weave and create stories out of everything around me. I could be sitting in a doctor’s office and every person around me becomes suspect to my writing it all down, every sound, every conversation I overhear, every minute thing is vulnerable to my pen.

The Heroes:
I see or hope to see in the mirror (note how I chose more for this one. :D) ~
~ Esther played by Tiffany Dupont in One Night with the King. We all have times of bravery and moments of “for such a time as this.”
~ Joan of Arc played by Mila Jovovich in The Messenger: The Story of Joan of Arc. Intense movie. She is one powerful force because of God.
~ “O Captain! My Captain!” Why, that would be Robin Williams as John Keating, the mind-stretching, status quo-challenging teacher in Dead Poets Society.
~ Liv Tyler as Arwen in The Lord of the Rings trilogy…come on, what woman wouldn’t want to reflect all that she represented? I love the scene where she has Frodo on her horse and she parts the waters with her mystical elfin language.
Who do you see when you look in the mirror?

Now, that’s a wrap! Thanks for making this week at the movies so entertaining!

Make note: early next week I’ll be passing on what Jaime began by holding a contest to win Mary DeMuth’s Daisy Chain.