When I Set My Mind to Something 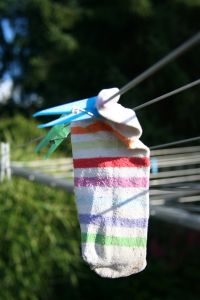 At first glance, you might imagine this post will be about the tenacity required to complete a novel. Or perhaps you’re thinking I’m going to tell you about planning my wedding or ripping up the carpeting in our enormous great room to surprise my husband with stunning hardwoods after he returned from a business trip.

Nope, I’m going to tell you about the incomparable quest for a dropped sock.

But this wasn’t just any missing sock (I’m not that uptight) and it didn’t simply go AWOL in the abyss of the dryer.

No, I witnessed the fall.

As I carried laundry up from our basement, one lone sock tumbled from the top of the towering load. I cringed as it landed in no man’s land.

Whether it was the glass of wine I’d already downed egging me on or the nerve of the sock to cliff dive like that, I can’t say, but no matter…I had to retrieve it.

Said sock waited for me at the base of the back of the basement steps in a skinny and nearly impossible to reach crevice.

I became Strider (aka Aragorn) daring to enter the cramped haunted caverns of the White Mountains. Might as well have been a sign below the basement steps that read “Thou shall not pass.” (Okay, officially done with Lord of the Rings references.)

I lifted my mock sword (familiar to most as a rod I popped off the laundry rack) and climbed suitcases like I’ve never climbed suitcases before. I extended my arm to the point my shoulder threatened to dislocate. My knees throbbed from the awkward frog pose I was forced to take. The sword (laundry rack rod) made contact. I pulled with all my might.

The sock didn’t want to come home to its partner.

Stubborn sock. I wiggled. Refusing to admit defeat, I maneuvered into a new precarious position. I slapped some double-sized tape on my sword. I jabbed at the thing like Jack killing the beast in a scene from The Lord of the Flies. (First Rings now Flies. I’ll try not to throw in of the Dance.)

If it had one to stick out, the sock would have jutted out its tongue in an obnoxious mockery.

I was losing hope. Cricks in my neck made me aware of muscles I didn’t even know existed. The white sock had officially rolled in enough dust bunnies to turn it gray (nothing about Gandalph).

I threw things at it. I threw my fists up. I threw up. (No, not the last thing or the second to last.) But I grew irrevocably determined.

I shimmied until I sprawled out over the suitcases and bricks and other miscellaneous objects that left mysterious black etchings on my wrists and clothing. Once more I jousted the sock with the sticky end of my sword. I cinched my eyes shut and dragged the lint-coated thing toward me. Reluctantly, it came.

Just in time for me to topple.

I have wounds to show for my sock adventure.

I also have two matching socks.

Have you ever cracked yourself up when your personality wouldn’t let up (even as things grew funny and a little perilous—hey, I have a Band-Aid to show for it)?

Email ThisBlogThis!Share to TwitterShare to FacebookShare to Pinterest
Labels: determination, laughing at yourself, sock