The Unexplainable Nature of Resiliency 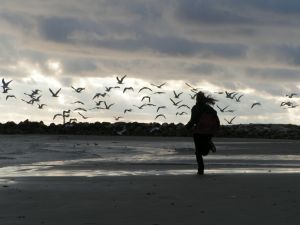 I’ve woven threads of resiliency into every single one of my protagonists, but I’m certain I’ll explore the unexplainable nature of this enigmatic human behavior at greater lengths in a future novel.
My mom and I have hour-long conversations on the topic. And I gravitate toward reading any book bestowing this theme.


Resiliency.
Why do some people bounce back while others give in to a state of dwindling despair?


I’m finding UNBROKEN, the harrowing account of an Olympian turned WWII crash survivor turned POW, near impossible to put down. And I keep playing one question over in my mind.
As an Olympic runner


Over a month at sea following his plane crash, haunted by sharks, blisters slicing open his skin, and hunger difficult to conceptualize
Enduring repeated cruel physical, spiritual, mental, and emotional brutality from those in charge of the POW camps


What made Louis Zamperini go on?
I’ve encountered rough seasons when I’ve felt emotionally, mentally, and spiritually pummeled, but nothing to the extent of what I’m reading. There’s no doubt I’m one hundred percent inspired by Zamperini’s persistence and resiliency. I recognize a flicker of it in myself. It’s that fight thing I’ve got going on whenever I sense I’m being dragged under. The incurable optimist in me bursting from the depths.


I can’t answer in entirety why Zamperini survived—what cultivated the fight in him. Most certainly it’s tied into resiliency.
I can say for me it always comes back to a little thing called faith. That “little thing” that has won over all fear and hopelessness in my life yesterday, today, and forever. That’s where the will to go on lives for me.

My desire is to broach thoughts about resiliency with you today. Read the following two passages from UNBROKEN. (This specific scene reflects on the extended time the three soldiers spent at sea in the aftermath of their plane crash.)


“Mac’s resignation seemed to paralyze him, and the less he participated in their efforts to survive, the more he slipped. Though he did the least, as the days passed, it was he who faded the most. Louie and Phil’s optimism, and Mac’s hopelessness, were becoming self-fulfilling.”


“Though they both knew that they were in an extremely serious situation, both had the ability to warn fear away from their thoughts*, focusing instead on how to survive and reassuring themselves that things would work out. It remains a mystery why these three young men, veterans of the same training and the same crash, differed so radically in their perceptions of their plight. Maybe the difference was biological; some men may be wired for optimism, others for doubt…” (*bold mine)
Tell me what you’re thinking. What does it take to make someone resilient? Have you bumped up against the unexplainable nature of resiliency?