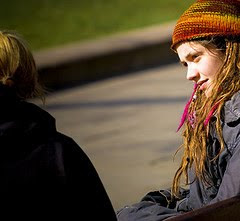 The longer I write the more convinced I become one specific quality has the greatest potential to improve my novel writing. But before I get to that, let me throw out a few brief scenarios.

A shivering man on a bus shoves his way past a red-eyed woman as she clutches the hands of two shoeless children, both wiping away smears of mud from their cheeks.
~
A life support machine falls silent. An intimate crowd of what you guess to be loved ones release tiny tearful noises, but one. One woman (the only one with her eyes open) stands in the corner of the room by the stained curtain, twisting her watch on her wrist and you swear you spy the slightest hint of her upturned lip.
~
“I do,” she whispers as though we can’t all hear—we’re not all watching for this exact moment.

Out of character with his clean-shaven chin, the groom, the man I beat one hundred and seventy-six times at gin rummy, the childhood friend who extracted leeches from my calves until my skin bled, the only one I’ve told about that one locked memory, echoes the unrealistic promise.

I shudder as my oldest friend slides the gold band on her pencil-thin finger. I let out a sigh, making sure it’s louder than a whisper. I intend to be heard.
~

Have I left you in suspense long enough about that one imperative quality?

At heart, I believe every writer is a psychologist. People intrigue us. We wouldn’t write characters if that weren’t the case. With this, I’ve noticed the more empathy I feel toward others, the stronger my writing becomes. Characters take on more layered emotions, more depth, and more authenticity.

It’s worthwhile to call upon empathetic feelings for main characters—our likable characters, but also for our antagonists.

I want to know more about these people and I have questions based on what I’ve read (even though I created these w/in a few minutes time, playing w/ POV, etc.). This is good. Inspiring readers to ask questions is a sure sign you’ve conquered the first step in getting them engaged.

Questions about bus scene:
Why is the man shoving past a woman with kids?
What’s up with the woman’s red eyes?
Why are the kids shoeless and muddy and why are they suddenly wiping the mud off their faces?
~
Questions about hospital scene:
Who died?
Why does everyone in the room have their eyes closed?
Why is the one woman fidgety and potentially smiling?
~
Questions about wedding scene:
What’s up with the immediate sarcasm?
Why is the groom out of character on his wedding?
What has the narrator so riled up? Is it jealousy or what’s the story? And why is she so sure it’s an unrealistic promise?
~

Some of those characters above might turn out to be “the bad guys” but already I care about them. And that is the number one goal for an author—to incite readers to care.

Empathy. Unexpected, huh? But I swear by it. In life. In my choice profession. In fact, I have no doubt I’m drawn to writing novels because of the abundance of opportunities to demonstrate empathy.

As a reader or writer, have you noticed the powerful influence of empathy in a work? Can you tell when it’s absent? What say you about empathy being one of the best resources for novel writers?