Conversation with a Contortionist 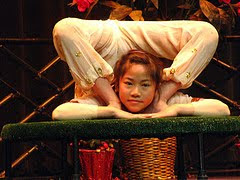 Everyone has a story. I know that. You know that, right? But only some stories are meant to become memoirs. Only some stories are so compelling you’re captivated by the smallest details, gripped by the evidence of trial and survival found in the slowed beats and pauses as the teller tells.

After spending a week with my husband’s family, we finished off our vacation with a refreshing stop in Pennsylvania. Steve’s aunt hosted us to help break up our long car ride. His aunt has been caring for her eighty-six-year-old mother, who has endured eleven years on dialysis.

After we settled the kids down for the night, I lifted the books I was reading and debated which one I was in the mood for. Little did I know I had a better story coming.

At first glance Steve’s aunt’s mother looks like an ordinary elderly woman in a wheelchair with a taut French braid weaving together what’s left of her gray hair.

And once I began listening, I mean truly listening to her story, I understood immediately I was not in the presence of an ordinary woman. As she revealed glimpse after glimpse of her life, I felt her extraordinary tale seeping into my conscience. I saw scenes of her life as though I were reading them in a page-turner novel.

Let me start where it started with her. From age three, Atta (we’ll call her for the privacy purposes) remembers practicing her contortionist moves under the stern instruction of her Native American Chief father who ran all the business affairs of their traveling circus. She provided the sole income for her family as they frequently picked up and relocated. Atta performed for Haitian dignitaries and bent her body in innumerable positions in order for her family to eat during the Depression.

She has distinct and terrifying memories of canoeing in the Amazon as a threatening anaconda surfaced near her flimsy boat. Atta also recalls how her father used her stepmother and sister as part of his act, placing an apple at their throats and chopping down with a violent strike, amazing the sparse crowds, sending shivers through her.

I asked my questions loudly because Atta is hard of hearing. Locked into her story, her appearance gradually changed before me. She went from intervals of focusing in on me with heated concentration to drifting, letting her eyes roam the scores of the Pirates game. The vision I had of her with a flesh-colored hearing aide shaped like a seashell and her moccasin slippers melded into her from ages five to twenty-one being led around with questionable circus folk. Eventually her family brought the show business (as she called it) to St. Louis and Illinois. As the sky darkened and fireflies lit up the night her stories continued.

I dared not interrupt, dared not even swallow for fear of missing something. Stories like this don’t come around every day. What I was hearing was Water for Elephants and then some. The experience equated to crack for a writer and an avid reader. I saw her story. Saw myself reading her pages. Her life. A story waiting to be told.

I did what I could to encourage Atta to continue the telling and to encourage my husband’s aunt to keep recording. I felt as though I graced the presence of a living memoir. Graced it. Grazed it.

And it gripped my heart.

So much so I quoted one of my favorite lines from Little Bee to our gracious hostesses. “We must see all scars as beauty. Okay? This will be our secret. Because take it from me, a scar does not form in the dying. A scar means, I survived.”

Ever have a conversation where you were certain you were interacting with a phenomenal memoir or story waiting to be written?

*I verified that I had permission to write about Atta, though I changed her name. You’d have to have been emotionally blind not to notice the years of pain layered in her story. While Steve’s aunt Okayed my writing this post, I felt it wise to change her name.
**the child in the picture is not Atta, but there are three black and white pictures in one of the upstairs bedrooms of Steve’s aunt’s home that portray Atta is similar poses.
***photo by flickr
By Wendy Paine Miller - July 18, 2011