Hungry for the Story 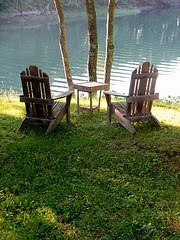 I’ve been told stories. Stories of renewal, loss, abuse, redemption, betrayal. This list goes on. Ever since I was a young child people have sensed something around me—call it a sonar comfort. A force field inviting them to divulge. They open up. Strangers and friends alike verbally unfold the maps of their lives. They let me in. I sit. I listen.
But I’m going to confess to you as I’m listening an invisible thing happens. And I like it. And I wouldn’t change it for the world. Right after the empathetic nod and the tissue pass, transference takes place. As though in the form of molecular droplets, born of tears or sweat, the story makes a leap from the teller to the told.
My brain absorbs those wee molecules and the story lands in a Matrix-like pod in my brain…waiting. Stationed.
~~~
Soaked with just the right character or thought the story will become. It will become mutated into an occurrence in one of my novels, a seed for a character flaw or the perfect ending.
Your story becomes my story.
I Mr. (or Mrs., no need to be chauvinist here) Potato Head your tangle of emotions poured out in progressive waves of relief, sadness, contemplation and make my own creation. I pop a measured amount of anonymity here and add adequate discernment and masking there so no one will know it is you. No one will be able to guess where the story came from.
But I know.
I remember.
I thank all those in my real life for helping me develop such a phantasmagorical imaginary one.
I think I now know what that welcoming sonar; force field of invitation is all about. I have an overabundance of empathy and…and I’m hungry for the story.
~~~
What are you hungry for?