Rejoicing in Our Failures

Recently, I had to make a decision to give up something I love. After months of wrestling, weighing options, looking at it from different angles, and procrastinating the inevitable, I surrendered to the fact there was no other option. It was simply the right thing to do. And even though I knew it was the right decision, I couldn’t help feeling as if I had somehow failed.

Days later I was still asking myself hard questions. I wanted to know where I had failed, how I could have handled it better, and what I could have done differently. It seemed I couldn’t shake feeling that if I had been a better woman, more efficient, not as lazy or selfish or weak, it wouldn’t have turned out the same way.

Taking time to honestly assess motives, strengths, weaknesses, successes, and failures, can be very healthy. I learn much about myself during times of self-examination. However, sometimes it can be carried too far and it becomes a jumbled up concoction of self-centered analysis paralysis resulting only in self-condemnation.

Sometimes, I find myself caught in this cycle for weeks, even months, never moving forward, only finding more evidence of my failure. This time, however, after only a day or two, that still small voice pierced through the noise, asking, “The right question is do you believe that God is sovereign over the affairs of men and that He can and will take your flawed human efforts and redeem them in a way that glorifies Himself, advances the Kingdom, and helps you look more like Christ?”

That one question halted my self-analysis dead in its tracks. It eradicated the self-doubt and self-condemnation that had plagued me for days. Because the truth is, if I believe that, the other questions don’t tend to matter so much anymore. What does matter is that God, in His Sovereign grace, takes even my failures and turns them into something beautiful.

Look at the lives of Moses who killed a man, David who committed adultery and then had a man murdered, and Paul who persecuted Christians. These men failed miserably. Yet Moses led the Israelites out of the land of their slavery; David was a man after God’s own heart; and Paul played a vital role in the early church and preaching Christ to the Gentiles.

We, like these men, may have made some poor decisions resulting in what seems like irreparable damage. But, just like these men, God will use even our bad choices for our ultimate good and His glory. Our God is one of restoration, reparation, redemption, and reconciliation.

Romans 8:28-30 NLT assures us that, “God causes everything to work together for the good of those who love God and are called according to his purpose for them. For God knew his people in advance, and he chose them to become like his Son, so that his Son would be the firstborn among many brothers and sisters. And having chosen them, he called them to come to him. And having called them, he gave them right standing with himself. And having given them right standing, he gave them his glory.” 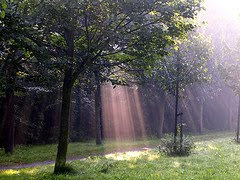 He knew us in advance. He knows our hearts and our thoughts. He knows our strengths and our weaknesses. He knows every good and bad decision we will make before we make it and He’s already working it all to our good. But even more than that, He has given us right standing with himself, in spite of our failed attempts. And being in right standing with Him, he has also given us His glory. Isn’t it amazing that a righteous and holy God shares His glory with a flawed and broken humanity?

I love the way Frederick W. Robertson puts it, “In God's world, for those who are in earnest, there is no failure. No work truly done, no word earnestly spoken, no sacrifice freely made, was ever made in vain.” So whether we are facing failures in our marriage, career, writing, finances, in our leadership of others, or any other area, we have hope. Our hope is in a merciful, gracious, and Sovereign God who brings beauty from ashes. And because of that, we can rejoice in all things, even our failures.
Chrystie is a fellow writer for Exemplify. To find out more about Chrystie check out her blog, Path from the Head to the Heart. I'm honored to call her friend.

*photo by flickr
**Thanks to Debbie Maxwell Allen for posting my article, Color Wheel Characters. If you missed it several days ago, check it out on Debbie's blog...here.
By Wendy Paine Miller - July 14, 2010