We Danced at His Funeral 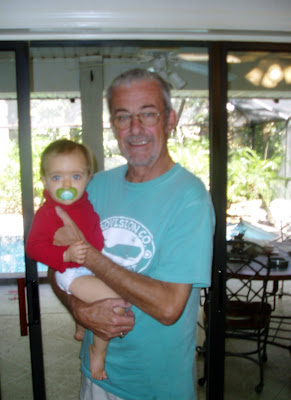 I haven’t written about this much. Some things are so heavy, they press in on the heart with such pressure, writing about them could incite an emotional combustion. Besides, I’m a mom and as all mothers know life doesn’t stop for me to feel. There are soccer games to attend, dinners to prepare and Peter Pan to read for the 100th time (which reminds me I need to check to see if my three-year-old still thinks Tinker Bell died on a cross like Jesus).
Anyway, you get my point. To remember, I mean really remember all that I endured two months ago carries the potential to unleash a firestorm of feelings. But when I do reflect upon my father’s death, having grieved the loss, I try to think of one image the most.
The dancing.
We had a brief meeting with the officiating pastor (one of my dad’s best friends) a few days before the memorial service. I really don’t think he had any idea of what he was in for collaborating with us. He slid a notepad across the table, on which he’d sketched a few ideas. That’s when me, my sisters and my mom whipped out Powerpoint and began our presentation of how we wanted things to go down. Well, not really. But us Paine women—no one could ever accuse us of not knowing what we want. We envisioned a video montage, we’d chosen people to speak, we had a poem we’d selected to read, and last but not least…we had the songs. (Here might be a good place to add that while my father had lung cancer, he’d received a good report from the oncologist the day before he fell and died of a stroke. We had little time to prepare. But like anything, we were up for the challenge.)
I cannot describe what it felt like to walk into a crowded room of people gathered to say good-bye to my father. Old business partners, neighbors, church members. Friends. Family. The messages of those who spoke were beautiful—messages about how my dad encouraged and stirred creativity. One speaker called him a one man tsunami. A video montage flashed on the screen. I read a poem my mother had written to him years earlier, appropriately titled The Dance, a metaphor for life.
And then came time for the end. My oldest sister introduced Life is a Highway. For years my dad informed us he wanted this song to be played at his funeral.
And play it we did.
Not only did we play the song…we danced to it. First our table—the immediate family rose to our feet. Then, slowly, table by table, every single person was on their feet.
Dancing.
A room full of Presbyterians (Presbyterians, mind you) clapping and dancing—dancing as we said good-bye.
Dancing at a funeral.
It’s the way he would have wanted it.
It’s the memory I hold onto.
By Wendy Paine Miller - May 26, 2010