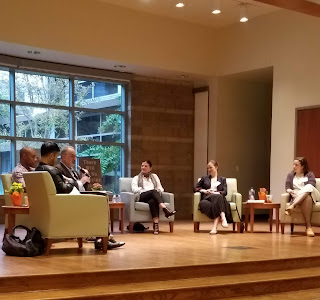 I felt absolutely spoiled attending a Books Are Better Shared event this past weekend. Not only did I glean from renowned authors, I also met a kindred spirit at the book event.

During his opening speech, James Mustich, author of 1,000 Books to Read Before You Die, shared that “a good book is the opposite of a selfie” in that books help us to better understand the world around us.

Casey Gerald and Lisa Brennan-Jobs discussed memoir writing on a morning “personal perspective” panel. Gerald explained his approach while detailing his friend’s story in his book. He felt it was imperative to consider capturing his story as a sacred text, to “use a scalpel, not a sledgehammer.” Brennan-Jobs said that she “needed fixed bones to hang her lyricism on.” It was thrilling to hear other authors explain why they do what they do. And how they go about it. I chatted with Brennan-Jobs at lunch about the complexity of writing memoir, in which she revealed how she didn’t really want to write a memoir, she was doing everything to avoid it. 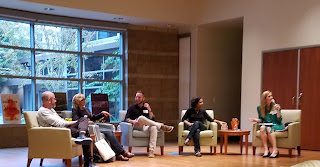 The afternoon “social perspective” panel featured more acclaimed authors. Stephen Markley said that while writing his novel, Ohio, from four unique perspectives, he “wanted to imbue into each character all the humanity people give to you.” James Frey, author of A Million Little Pieces, and his latest, Katerina, stated that he wanted to write a book people could lose themselves in. I could relate one hundred percent when he told the audience he aimed to write books he wished other people would write, books that make him feel. Shobha Rao, author of Girls Burn Brighter, touched upon something that also resonated with me. She said, “As I’m writing, the only responsibility I feel is to myself. Once the book is public, Rao explained how there’s a shift and at that point the book now enters a public conversation.

I told a woman I saw in the hall (it was the restroom, actually) that my brain felt happy.

I go at this writing thing for hours every day. It’s a solitary task. To be around such esteemed and well-spoken authors who are also committed to going hard at the craft was a thrill to say the least. The combination of smartly prepared panel discussions, potential for author interactions, the appreciation and celebration of book clubs and book club reads, and finally meeting a new book friend made this event a complete win.

I’m going again next year and I even signed up to volunteer. Because talking books and being around people who enjoy discussing books has a way of invigorating me like little else can.