Write What You No 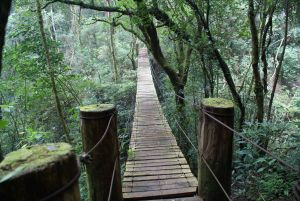 If you’re a writer you’ve heard the expression write what you know. Actually, it’s probably been drummed into your head so much you might feel hammered down inside a box, inhibited by what you might dare tackle in your work. But I’m going to alter that advice today.
I’m going to suggest you write what you no.
There is an untapped power waiting in the areas you keep saying no to. What am I referring to?
Three areas in particular:
What you fear
What you believe you’re inadequate to write
What’s too painful


Write what you fear
That topic that you keep locked in the closet because it feels more like a raving monster than something—anything you’d ever want to write about. Do it. Write about it. Trust me, every single person has at least one of those red-eyed, sharp-toothed things hiding in their closet.


And when you get brave enough to finally put it on the page, you might be amazed to find the thing isn’t so scary after all. Painful, perhaps. Powerful, likely. Worth it…absolutely.


Every writer doubts their talent and ability to create. Anne Lamott says, “But it is fantasy to think that successful writers do not have these bored, defeated hours, these hours of deep insecurity when one feels as small and jumpy as a water bug. They do.”
Consider it a strong nudge whenever you feel this way. Pay attention to what’s playing in your mind. Maybe it’s that very slide show you’re supposed to explore in your story. Because insecurity or not, the show must go on and you are the ultimate director.
Allow your insecurities to point you toward the work you’ve been avoiding.


Write into the pain
No, it’s too painful. I don’t want to go there. I’ve already healed from that. What’s the point of diving back in? What good would it do?
Some of my favorite books depict characters enduring great tragedy. The Art of Racing in the Rain. The Storied Life of A.J. Fikry. The Book Thief. I’m reading Between Shades of Gray right now. It’s a poignant story about a fifteen-year-old Lithuanian girl named Lina taken from her home and thrown into a cattle car by the Soviet secret police. This book is quickly becoming one of my favorites because of the beautiful risks the author takes, how she delves into an unimaginable hardship. Ruta Sepetys evokes a rich sense of empathy for the characters and invites readers into Lina’s harsh reality.


After I read Ruta’s bio I understood she had to write into the pain. Her own father was a Lithuanian refugee. Her bio goes on to state, “Ruta wanted to give voice to the hundreds of thousands of people who lost their lives during Stalin’s cleansing of the Baltic region.” 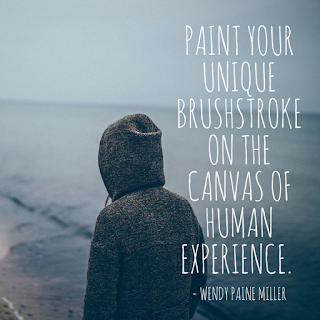 
Write into the pain to give voice.


Paint your unique brushstroke on the canvas of human experience.


We come together in this. We grow. We change the world.


Next time someone tells you to write what you know, think about writing what you no instead.