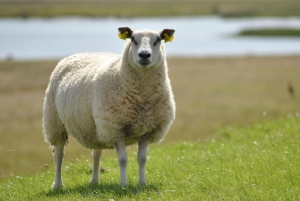 
In 1873, frogs rained down from the sky in Kansas City. In 1948, a group of golfers in Bournemouth, England, was showered with herring. The animals had been swept up in the clouds by strong wind.
Takeaway: Careful what you get swept up in.


More than 30 percent of New Zealand’s greenhouse gas comes from methane in the burps and farts of the country’s 45 million sheep and 10 million cows.
Takeaway: Laughter!


The largest diamond mine in the world is at Mirna in Siberia. The hole in the ground is 4,000 ft across—so big that helicopters are sucked into it if they fly too close.
Takeaway: Some mines are big enough to suck you in if you’re not paying attention. (Mine, all mine. Gullum.)


When the volcanic island of Krakatoe, in Indonesia erupted in 1883, it could be heard a quarter of the way around the world.
Takeaway: Careful how loudly you erupt (which now just makes me think of the sheep and cows).


On a clear, moonless night, you can see about 2,500 stars with the naked eye.
Takeaway: Take your naked eyes outside at night to look at the stars more.


On average, there are just five days a year when it doesn’t rain on Mt. Waialeale in Hawaii.
Takeaway: Don’t visit Mt. Waialeale.


There is no wind or rain on the Moon, so footprints made by astronauts are likely to remain there for millions of years.
Takeaway: You never know how long your impression will linger.


*Earth facts from One Million Things: A Visual Encyclopedia (great library book to have during the storm).
**Takeways (mine, all mine)
***photo by stock.XCHNG