How to Unleash the Risk Taker in You 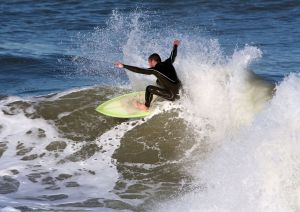 Mark Visser is a daredevil. I read about him in Hemispheres on the plane during my recent trip out to California for an agency retreat. Visser thrives on creating impossible stunts and then proves the impossible is possible. Think Evel Knievel meets Jaws. Those are the kinds of dares he likes to perform involving surfing mountainous waves at midnight. You know, run of the mill stuff.


A few sentences struck me in particular toward the end of the article on Visser. When asked if he thinks his latest project is too much for him, Visser answeredà


"Visser stops, looks out to the ocean where he first learned to surf, and ponders the question, ‘I’ve broken it down,’ he says, ‘and honestly think I have a strong chance of achieving everything I’ve set out to achieve. If anyone doubts it, that’s fine. I doubt things too.’ He loses himself in thought for a second. Then he turns back to me and says matter-of-factly, ‘Anyway, what’s the point of setting a goal that’s easy?’”


We were challenged to dream big during our agency retreat.
This is not a problem for me. In fact, I thrive on this kind of brain buzz.

Today I’m giving you 8 ways to help you unleash the risk taker in you.


~ Visualize the Positive Outcome
~ Break It Down into Doable Feats
~ Dare Yourself
~ Refuse to Focus on What the Other Guy Thinks
~Don’t Germinate a Fear that Isn’t Meant to Grow
~ Change It Up (Was it Ben Franklin who once said, “The definition of insanity is doing the same thing over and over again and expecting different results.”?)
~ Imagine the Specific Rewards (Emotionally, Spiritually, Physically, Mentally)
~ Seek Accountability


Have fun ruminating on the above. I’m off to surf mountainous plot concepts, story arcs, and character development that will blow you and I both out of the water someday.
Are you intentional about being a risk taker? Does this come naturally? What has helped you become more of a risk taker?


*photo by stock.XCHNG
**kicking around turning this into a series of posts like I did with What Women Want…please let me know in the comments if that idea appeals to you.