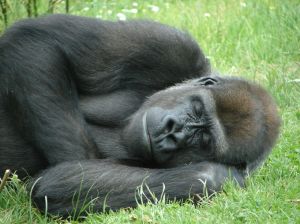 Here’s a question…when you go to the zoo and walk by the gorilla exhibit what are you hoping to see? Probably not the band or troop catching some Zzz’s. Conked out.


Nope, you want them in action. You want them at their playful best.
There are ways we become sleeping gorillas in our chosen careers—ways we’re at risk of atrophying our message and impact.


Ever seen a baboon turn its back to you? Sort of funny to watch, but not very entertaining. If we allow rejection to seep into our souls, let it influence us, encouraging us to turn our backs on the industry and the professionals involved, we’re letting it win. And we’re not all that fun to watch in the process. No one likes a pouter.
Neglecting to Set Goals & Allowing Set Goals to Slide


It’s an accountability system. It works. Stick with it. If it’s difficult to remember the last time you created a goal sheet, well today is a fine day to begin anew.
Focusing on the Wrong Things


This is the monkey staring at the kid banging on the glass. Kids, don’t bang on the glass. It’s mean and it makes monkeys look at the wrong thing. Throws their whole world out of whack.
Isolation Station


A thumb-twiddling gorilla gets pretty boring to observe. Not near the same excitement and community potential that comes with gathering around other baboons.
Paying Attention to Discouraging Voices


Remember the kid banging on the glass? Behind him is his mom saying things like, “Look how red his butt is” and “How ugly.” You’re beautiful. You know it. We know it. Ignore the mom with the Fran Drescher voice. Carry on, monkey. Carry on.
Losing Sight of the Big Picture/Long Haul Approach


You belong in the jungle. Just because you’re stuck behind a glass enclosure now does not mean that you’re not meant for bigger things. You’ll break out. I can see it in that sneaky grin, the blueprints you stash behind your pile of leaves, and every time you bulk up your arms by swinging like a circus acrobat. You’re jungle bound, baby.
Validation Station

Here’s the monkey throwing bananas, performing twirls, and undulating like a mad monkey to get the laughs. But while screaming, “Like me, like me” in monkey talk the poor guy has to know it’s a short show. And unless he loves what he’s doing the reality is the clapping stops, the cheering ends. People walk on. Banana throwing needs to be an inbred love. Because suddenly the crowd is in an alligator mood.


Falling Out of Love with the Craft
What’s one of the most fascinating behaviors to witness in monkeys and gorillas? Their grooming. They devote such care in to plucking out miniature mites. It’s noticeable when we stop caring for the craft. Everything gets itchier. For us. For our readers. Mite-y uncomfortable (ba dum dum).


So, let’s not be caught sleeping gorillas. Let’s throw bananas. Make amusing noises. And band together.
And while I’d love to claim writing isn’t monkey business, sometimes it is. Time to get your monkey on.


Can you think of other causes of career atrophy? Any other fun monkey-related thoughts?


*Oh, and I know a gorilla is not a monkey, but an ape. But it was too much fun to smash all these monkey types together.
**photo by stock.XCHNG