What if Time Disappeared? 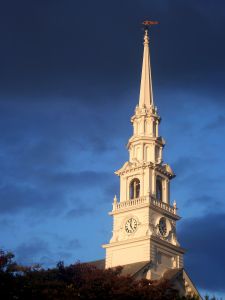 What if one morning you woke up purely in response to your circadian rhythm? Summoned to morning by the light streaming in through the curtains. No squawking alarm clock. Must have forgotten to set it. You head downstairs to prepare breakfast. No green glow on the stove to indicate how much time you have until you need to bust out the door to work. Huh, maybe the power went out? You shower, dress, and toss granola bars and bruise-less apples in brown bags for your pre-teen kids. No watch to check at the flick of your wrist. Where did you put it? Even your iPhone appears out of batteries and unresponsive.


“Kids? You awake yet?” You call up the stairs.
As you tromp through the house, restless to know whether you’re aimed to make it to work on schedule it suddenly feels as though an umbrella has opened up inside your chest. Why is it so impossible to locate one working clock?


In fact, there isn’t a single way to read time anywhere in sight. The wall clocks stare at you sans their hands. Those kids playing tricks. The cable box, where the numbers usually light up the color of a sunset, remains black and useless. No numbers at all.
It’s as if time no longer exists, as though the night swallowed it whole.


The entire morning has become Alfred Hitchcock meets Ecclesiastes (the whole chasing after the wind bit).
What is going on? Who stole time? Please don’t let this be a sign of early onset Alzheimer’s.


No, that can’t be it.
You rush to your desk to check your calendar so scrawled over with family events it looks like a train schedule, grocery list, and roadmap smashed together. Funny, all the activities are listed, but the dates are gone. Vanished—missing even the month.


Forget this. You throw up your hands, yell to rouse the kids one more time, then log online. Surely your computer won’t fail you now.
Ah, the monitor blips and the computer hums to life. Alas, some answers. Time sweet time.


Guess again. All appears as normal, but the absence of any reference to the time.
Are you being punished? You squint and tap hard on the keyboard, willing one, just one substantiation of time to materialize. Had you fooled yourself into thinking you could capture time like some hovering butterfly? Netting it. Controlling it. Planning so much, with such intention, expectation, and precision that time would bend to you like a flower opening to the sun’s rays?


Is this your fault? Did you erase time?
***
These thoughts were inspired the other day when I realized the insane number of methods that exist for keeping track of time. I thought about the verse instructing us to be stewards of our time. I thought about Kansas and their song “Dust in the Wind”. I also thought about The Twilight Zone. My thoughts have a tendency to do that—to keep moving from one to the next—connecting, always connecting.
Then I began to envision the above scenario playing out in my mind. I asked myself how my world would change if time simply disappeared. (Yes, these are the wacky things that keep me up at night.)
I landed on this:
It’s not seconds and minutes that define who we are, they’re merely the shell, but the moments we create inside those seconds and minutes that embody us most.
Here’s another quote that speaks well to this imaginary scenario:
“Life is made up of moments, small pieces of glittering mica in a long stretch of gray cement. It would be wonderful if they came to us unsummoned, but particularly in lives as busy as the ones most of us lead now, that won’t happen. We have to teach ourselves how to make room for them, to love them, and to live, really live.” ~ Anna Quindlen, A Short Guide to a Happy Life
How would your world change if time simply disappeared? Initial thoughts…