8 Ways Being a Writer Time Travels Me Back to H.S. 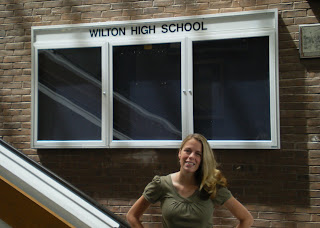 Sometimes this industry brings me back in time. To a time in life when emotions ran high, math grades dipped low, and everything else seemed to fall somewhere in that elusive “waiting to graduate”  middle. Ah…high school.

Exploding Volcano
More often than not building a platform can feel like one huge science experiment. Half the time I have no idea what I’m doing. The other half I’m mixing social networking chemicals that surely aren’t supposed to be blended together. Waiting for results. For something to effervesce, pop, inflate, or explode. Funny thing is I’m the one who is regularly tempted to do all of the aforementioned.

Will You Sign My…
I have an embarrassing confession and it’s only coming out once. Here and now. In my early stages of blogging I actually had the gall (read: complete ignorance) to ask a published author I’d connected with to endorse my blog. My blog. Yep. So proud.

Anyhoo, now that that humiliation is out there (sheesh, this really is like high school) I’ll add that book endorsements remind me a little of getting folks to sign your yearbook. I remember some students had hundreds of lengthy notes on their yearbooks. Some endorsements exude the same attention and care. Makes me wonder about mine someday. Really hoping I don’t get the “see you around” version.

De-nied
Ouch. Did you ever want to go to a dance with someone and they never asked? Or like someone who never reciprocated the feelings? Of course I’m not speaking from experience. Ha! Rejection = the one curse of every high school student must endure before graduation day.

Don’t think I need to make that link to writing. Most writers know exactly what I’m talking about.

I Am Free
There are times I need to decompress. These are my free periods. And during free period I head to FB and Twitter. And apparently so do a lot of other writerly folks.

Hey Look at Me Attitude
Would you believe we had mirrors that lined our high school hallways? The plight for popularity is at its prime (alliteration) in high school. Popularity and that all too recognizable hey look at me attitude. Everyone is out for attention.

When it comes to the writing industry seeking recognition doesn’t hold the same kind of negative connotation, but like high school it’s worth it to self-check on this one. Unless you want to be caught staring at yourself in all the hallway mirrors.

Cramming for Midterms and Finals
Studying the craft, preparing pitches, and knocking out a few Ks can evoke stress levels only reached during major test taking times of my life. SATs revisited.

There are times I literally have to sit down at the computer and verbalize the words, “Game on” before I sit to write.

What Did They Write about Me?
I went through a year where the librarian would hand me a permanent marker whenever I walked in the school library. Apparently some dude was having fun scrawling not so innocent messages about me in the mezzanine.

Hunting for my name to scratch out reminds me of the author’s amazon rank check. How many stars? How could she write that? Where’s my permanent marker when I need it? ;)

Uh, What Was I Just Doing?
I was a doodle master in Calculus. I still doodle. But now I call it painting, home projects, and the occasional clean sweep. Still is just as easy to lose focus on what I’m doing as it used to be back in the glory days.

Can you think of any ways being a writer is like reliving the glory days of high school?