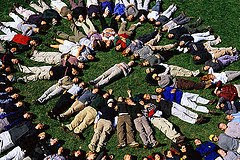 I met with a local author recently (something I’ve been in the habit of doing lately, meeting with writers in person as well as connecting online) and we agreed there really needs to be a support group for the spouses of writers. Now, I’m mostly kidding on this, but read the following mock meeting and tell me you don’t recognize a hint of yourself in there.

Jane: So, my husband’s been at it again.

Jane: He’s gone into the cave.

Emily: Oh, that’s nothing. At least he doesn’t talk to you at length about burgeoning (his word) characters. Or worse, every single new manuscript request. You should see the way he checks the computer for new emails 24/7. And the highs and lows. Writers truly are neurotic. He’s edited his novel more than once. What’s the deal, it’s like he’s obsessed with that manuscript.

Byron: You mean MS. I’ve learned to talk in acronyms. My wife’s done with her third MS and is on her fourth WIP. All HEAs, but IMHO they really aren’t all that happy. And now because she recently joined Twitter I’m called her DH.

Jane sips coffee, then: And what’s up with my husband struggling with his idea so much? He loved it at first, plotted the whole thing out. Plotting alone took him months. You should have seen the trail of notes all over our house. I thought they were love notes until I read the tidbits of research and descriptive phrases all over them. If you love an idea like that, what could possibly go wrong while you’re writing the middle?

Byron: I don’t know. I don’t get it though. They invest so much of themselves in their work, don’t they? It killed me to see my wife crying after her first rejection last week. Crying!

Emily: Oh, be a little more sensitive. She must love what she writes.

Byron: There’s love. And then there’s love. Ever seen that commercial with the lady kissing her dog? I’m just saying my wife was convinced she was horrible and that no one would buy her work. But she’s won awards. She’s wonderful. It’s like writers are required to sign up for a how to beat yourself up class before they pen their first word. Sensitivity on steroids.

Jane laughs and slaps her knee.

Emily: I’m just trying to figure out where these characters come from. I wonder if he writes about our fights.

Byron: I know my wife doesn’t. She has enough imaginary people bouncing around up there. (Points to head) She’d never use anything from real life. It’s like she’s not paying attention half the time. Either that or she’s taking mental notes for her next chapter.

Jane: And what’s up with all author photographs posed with such seriousness? I write therefore I can’t smile.

Emily: How about how funny they can be about others reading their work. Or the way they over-caffeinate themselves. Do they think it will inspire more great ideas?

Byron: Or working in their pajamas and skipping showers? Or the social networking craze to build that platform.

Jane: Or the horrendous waits they endure to be published. Masochists. (Shakes her head)

Emily: We may not get them, but we love their neurotic souls.

Jane & Byron in unison: Yeah, we love our crazies.

Okay, now for the fun question…whose spouse could you relate to in that entirely pretend, imaginary, made up, off the top of my head, fabricated (redundant much?) example? :D