What Manatees Taught Me about Inner Peace 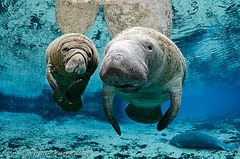 Last week I got to do something I’d been looking forward to for months. I kayaked near manatees. My husband watched the girls so my mom and I could have an all day excursion while we were down in Florida.
I’ll never forget it.
I went into the experience expecting to see maybe one or two sea cows (as they’re often dubbed) from a distance. We put our kayaks in the water and headed out. Within five minutes of paddling, I began to notice gray shadows moving under the water. Close. So close, if I wanted to poke them with my paddle I could have easily done so. But there’d be no paddle poking that day. Instead, I pushed the kayak forward in awe. I squealed with joy upon seeing the mysterious creatures all around me, even directly under my kayak at times. My muscles relaxed. I felt as though I’d been dropped in one of those nature shows my dad and I used to watch. I was living the adventure.
I was at peace.
After over an hour studying the creatures and sharing my excitement with my mom, we ran into trouble.
We’d been casually conversing with a volunteer in his kayak, on the water helping protect the manatees. We didn’t see it coming.
A man, who might as well have finished his sentences with, “Argh” and shook his hook hand at us, steered his pontoon boat directly toward my mom and the volunteer. Then he sprayed verbal insults at them. His ugly words rained down over the water. My mom is hard of hearing and couldn’t pick up specifics. But I heard every single word. And my heart lit on fire. (Here would be a good place to mention I can be fiercely protective of loved ones. Since my father died, I’ve been even more so of my mom.)
The peace that had swelled inside me, a balloon of contentment, deflated as I heard his words and the rudeness that accompanied them.
I’m a feisty gal. I had no problem letting him know I found him rude. He had plenty of room to steer around the kayaks.
But he aimed to pop. And pop he did. He went off. A litany of anger. A tirade of blah blah blah. I bantered for a bit. Didn’t back down easily. No, that I did not do. No one messes with my mama.
And my peaceful day for that matter.
My mom sat silently in her kayak during the whole charade. Eventually the man moved on and the volunteer followed him and held him accountable for disturbing the peace (I’m grateful to that man).
My veins became tunnels of fire. My peace had been shattered. The manatees swam in meandering patterns all around us. The day remained glorious. The scene incredibly meaningful.
But I struggled to let the rude pirate’s insults go.
I struggled to let go.
My mom and I discussed it. She reminded me of what I’ve had to learn time and time again. It’s important not to let others control our emotions. The longer I dwelled on it, the longer he had hold of my feelings, my day.
So I fought to release it. We spent over an hour more in the cove where massive manatees played below us. Some had visible scars. Some bobbed to the surface and puffed for air.
Gradually I let the beauty of the experience rush inside my veins again. Then we decided to head back. When we were five minutes shy of where we’d put in, I noticed a walrus-looking fellow rippling beside me. I hollered to my mom. I’d seen plenty up close by this point, but there was something different about this guy. I stuck my hand down in the water. He swam beside my kayak. Then he rose to the surface, high enough so I could touch his blubbery sandpaper back. Before he dove under he bumped up above the surface and blew out an adorable snoring breath.
I cheered to my mom. She cheered back.
Peace flooded me again.