The Preacher’s Bride by Jody Hedlund

Switching up this One Question Friday to review my friend, Jody Hedlund’s debut book,
The Preacher’s Bride.

The Preacher’s Bride. The beginning hooked me. The middle swept me off my feet and the end left me with an overall feeling of contentment. Now that’s the definition of a good book. My friend, Jody Hedlund orchestrated a beautiful story, creating a rich cast of characters with deft attention and intentionality. I flipped pages quickly. My mind was transfixed as I read the entertaining and tension-building plot.
~~~
And I’ll be honest with you; this is not the kind of book I ordinarily read. But I’ve read enough of Jody’s blog posts to trust her writing skill. I was not at all disappointed. The Preacher’s Bride delivered. My heart fluttered with Elizabeth Whitbread’s, a young Puritan woman feeling called to help care for motherless children. Jody handled the romantic elements of the story gracefully. John Costin, a preacher in the throes of grieving his wife, is portrayed in a realistic light. I admire how through the vulnerability and conflicting moments, Jody evidenced her research of England and its inhabitants in the mid 1600s.
~~~
One of my favorite parts of the book doesn’t occur until the end in the Author’s Notes. I love what’s revealed in these notes. It added to the satisfying impact of The Preacher’s Bride—a book I’d highly recommend.
Well done, Jody! 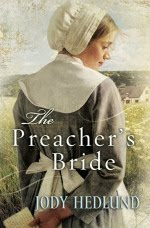 In case you miss the One Question Friday, I’ll hit you with one. If you’ve been blessed to know Jody through social networking, what have you learned from her?
~

I’ll go first. I’ve learned when I become published to maintain humility and grace in the process. Thanks, Jody for bestowing those qualities. And I also like how Jody often uses her blog as a resource to help other writers grow.

If you don’t know Jody, well it’s about that time. Head here and introduce yourself.

*I received a copy of this book in exchange for my honest review
**Click over to Jill Kemerer’s blog today for a party
celebrating Jody’s launch
By Wendy Paine Miller - October 08, 2010