Not a Balloon but a River 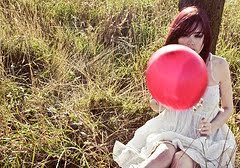 I used to think my dreams were balloons. To be held high, admired by looking up. Things that could pop at any given moment.

I’m beginning to see my dreams much more as rivers. To bathe in. Things to respect because they move through. Dreams take me.
A balloon is made of flimsy material. Blow enough air in, it pops and shrivels.
A river surges onward, navigating through its course with life-giving water.
A balloon always floats up, aimlessly up. It’s easily influenced by the wind.
A river knows there are times for placidity and other times to roar.
A balloon in its prime provides temporal enjoyment, fleeting.
A river also has the potential to dry out or even overflow. It relies on a great source to pour into it.
Balloons attract the eyes of little children. 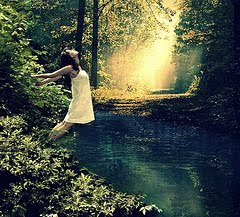 Rivers attract everyone in need of water.

Balloons are easily lost or tangled in branches or wires.
Rivers careen and form estuaries, creating their own path.
Balloons are harsh sounding when they pop.
Rivers flow, instilling a delirious calm as they smooth rocks and push toward greater bodies of water.
My dreams aren’t balloons. They are rivers.
What are your dreams?