I haven’t been shy about admitting that characters are one of key influencers for why I write. While other girls my age fussed with hair bows and those impossibly hard to fit on miniskirts with their Barbie dolls, I fussed over storylines. I knew I was different from most fourteen-year-olds (did I write fourteen? No. No. I meant eleven. Nine, maybe. Certainly not fourteen) playing with Barbie dolls. I needed drama. I needed my sock clad Suzy Barbie to undergo conflict and tension with Betsy Barbie. Although, I’d named mine Alexandria and Violet, names I found to hold more “depth”.

My point: I’m a grown up still finding a way to invent stories. The only difference is I play out the stories on the page and I’m hoping my stories have a little more maturity to them now. 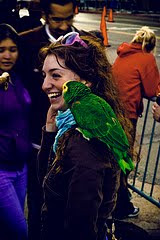 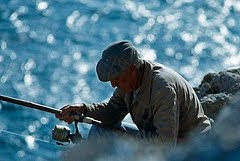 That being said, I’m throwing the fun your way today. Tell me what happens when these two characters meet. I want dialogue. I want to care about what happens next. I want it to lead to story.

I’ll go first.
Juliette crouches down next to Bill on the rocks. “I heard you had a bright green bird on your shoulder last night,” Bill says.
Water laps at their feet. Bill scans his squinting eyes over the cove, searching, as if the water holds the power to erase all the ugly years between them. “What of it?”
“Were you out late again?” Bill casts the line in a beautiful arc, sky bound and then they both watch it sink gracefully into the water.
“Papa, when will your worry end?” Juliette ties her cascading black hair in a cinched knot behind her back. “How long have you been at this?” Juliette motions toward the fishing line.
Bill scratches his free hand under his gray cap and huffs out an agitated breath. “All morning. Somebody needs to feed my bird.”
~~~
If you don’t feel like writing about an interaction between the two, feel free to come up with a title to the scene I wrote.