Step Right Up To Vote

I need your vote to break the Tie! Let’s conclude the String a Story Together Contest together.
Christina and Bina constructed additional paragraphs, incorporating a fourth picture into their creative stories. Please vote on the winning prose and provide a reason for why you voted for Bina or Christina’s paragraph. * = paragraph you're voting on.
Bina’s:
It's funny when I see her now. I know she is all grown up and that she is moving on to start her life, but when I look into her eyes all I can see is who she used to be. I can still see her sweet face, knotted up in fear and frustration when she was "lost" at the zoo. It was only 15 minutes but to her fragile four year old mind, it was an eternity that began when she followed the "bootiful pea-tock" off into the corner of the petting area. She was so little, so frail and so much in need of me to be the one who made the world ok again. So as I see her now, atop a magnificent beast and in complete control, I wonder where the time has gone and just when it was that my baby became a woman.
*But at the thought of "my baby", my heart recognizes the trespass I have made, both in my mind and in my presence here today. She had asked me to meet her at the corner of 5th and Main and I knew it was because she felt that my coming to this crowded event would make it seem as though I actually still existed in her life. I know she saw me just now as she turned so regally towards the risers, making me think that she could sense my heartbeat here among this sea of talkative strangers. I know that there will be a price to be paid for my dismissal of her wishes today but when I saw where she wanted to meet, I couldn't help but think that my place as her mother deserves more respect than an almost random meeting at a soggy phonebooth downtown.
Christina’s:
The little girl in blue was blue. She'd been told she was the prettiest of all but then she spied the peacock. His blue was brighter and his lacey tail swirled as he walked. She stood and spun yet couldn't get her own dress to dance as beautifully as the peacock's plumes.The lady watched from a distance and knew instinctively what the little girl was feeling. There will always be someone or something prettier, she thought to herself.
*But beauty is not always what it seems. Like a shiny, red phone booth without a phone, a finely feathered bird that has lost its song or a grandiose cathedral where no one roams, beauty without soul is useless. 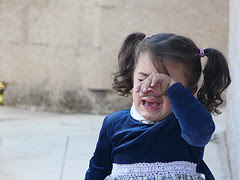 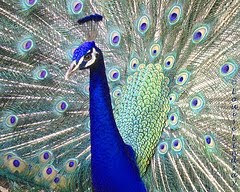 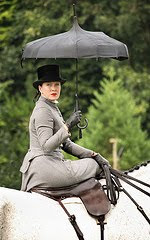 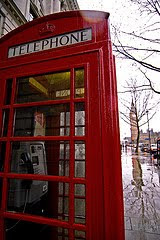 Well strung, ladies. Clever. I await the votes and I’ll announce the winner of the foot soak as a * on Friday.