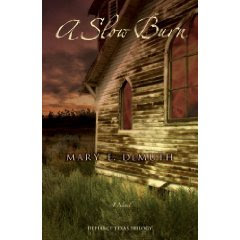 Mary E. DeMuth renders a powerful tale of transformation and the ongoing ache of working through forgiveness in A Slow Burn. Emory Chance struggles with a grappling addiction and fights to let go of her murdered daughter and the events surrounding her death. DeMuth is unafraid to depict heart-wrenching portrayals of drug abuse, suicidal thinking, bitterness, and a threatening murderer scaring up the town of Defiance, as well as delve into other controversial topics. Her writing blooms on the page with a distinct and wonderfully authentic voice.

In this second book of the Defiance Texas Trilogy, DeMuth brings the reader through a journey, introducing the concept of hope and the impact of truth revealed throughout each and every exploration of tragedy. Key characters, including ever-forgiving Hixon Jones and loyal Ouisie Pepper infuse the story with resolve and rich personality.
DeMuth succeeds at creating memorable characters in A Slow Burn. The redemptive message weaved throughout the book, as well as periods of suspense, culminate in a fascinating and well-written story, leaving me to wonder how it will end.
By Wendy Paine Miller - September 29, 2009