I’ve never enjoyed adhering to rules. It might be tacky to break them upon receiving an award, but I know the giver of the award understands my intentions. I was honored to receive the Scribbler award from Cindy R. Wilson. Whenever I visit her blog she pulls my mind to a different place. I love that. The one rule I will follow because I think its cool is to pass the award along to five deserving bloggers. I’ll also write a sentence why I follow their blogs.
Beth at This Mommy’s Life because she’s my twin
Jeanette Levellie at Audience of One because I’m attracted to her integrity and honesty
Heather Sunseri at Balance With Purpose because she thirsts for knowledge and growth
Krista Phillips at Krista’s Reflections because she makes me laugh
Lady Glamis at The Innocent Flower because she sparks thought and my perspective to blossom
I have to be honest, without thinking hard I can come up with a dozen more blogs to give this award to. I could spend the rest of my blogging career giving out awards for Junebug’s sake. I don’t know who Junebug is but I was up late last night and sometimes I write things that make no sense. This is allowed here. Remember we’re chillin’ in my thoughts. 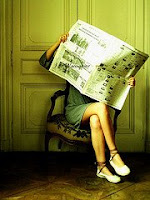 I also realized I haven’t had the chance to update you about the article written about me in the local paper. It was certainly an honor to be contacted by the interviewer and during our meeting we couldn’t resist comparing books we’ve read. A sheer delight. Here are some lines from the article that stuck out to me:
“She (she = me in case you’re as tired as I am and lost track) believes the experience of living abroad and experiencing cultures different from her own were important to her later life.”
~~~“Ms. Miller said the material for her novels comes from ‘anywhere and everywhere…’”
In regards to my story being included in the latest Chicken Soup for the Soul: Power Moms book in the company of bestselling author Jodi Picoult and Connecticut writer Jane Green, my interviewer quoted me, “I don’t see myself as a power mom except in helping women and encouraging them to carry out the role they’re currently in. I want to empower women. As women we need to look out for one another.”
Finally, the interviewer asked my pastor’s wife/director of women’s ministry of our church to be a secondary source for the article. I’m honored by some of the kind words she used to describe me (warm, intelligent and witty). Immediately after I finished reading the article published several weeks ago I called Bonnie, the pastor’s wife and laughed with her insisting I had her fooled.
How about you—has anyone ever said something about your character that you found about later that instantly humbled and uplifted you?